If you know at least anything about the world of video games, then you must be aware of the legendary saga called half Life. This title is famous for being plot-driven, while the scenes are pretty flexible and depend on the actions you perform while playing. As such, the gameplay and story work as one whole. The game is not divided into missions, campaigns, or levels. The game is divided on the formal level only – there are maps and locations you will wander around. The main hero of the game is called Gordon Freeman and gamers see the world of Half Life with his eyes. Almost all the scenes in the game allow you to control the character, but there are some video-episodes, where you become an observer only. As a rule, these crucial scenes that depict the plot twists or monologues of the main character. However, the perspective stays the same – you still observe everything as Freeman. There is no way you can see him “from the outside”. This provides a feeling of presence and increases the level of realism.

The game was inspired by Stephen King’s novels, namely “The Fog”. The events take place at the scientific research base called The Black Mesa. This place is located inside of the mountain, that is why it has such a name. Gordon is a young researcher and a fresh co-worker of this scientific organization. He has graduated not so long ago and now he is a specialist in the sphere of theoretical physics. He works in the department of Mesa that is responsible for the materials connected with paranormal activities. The title can be characterized as a shooter from the first-person perspective and, as we have already mentioned, you will see the world from Freeman’s point of view all the time. The action is linear and doesn’t have any pauses – everything is complete here and feels like a single flow. There is one break in the game – when the protagonist is being attacked by the soldiers and loses consciousness. Later, he wakes up at a different location. In general, the maps are linear and suggest the only correct way of playing. The maps are connected and named as chapters. Most of your playing time, you will have to shoot the enemies with your gun (well, it is a shooter, all in all). Your chances to survive depend on your health level and your defending suit – a charged one will save you from injures. You can replenish your health and defense, gathering the batteries and medical kits all over the map. The gameplay is all about your interactions with the environment. 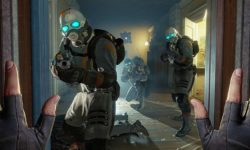